ANDY DENZLER - Out of the Dark 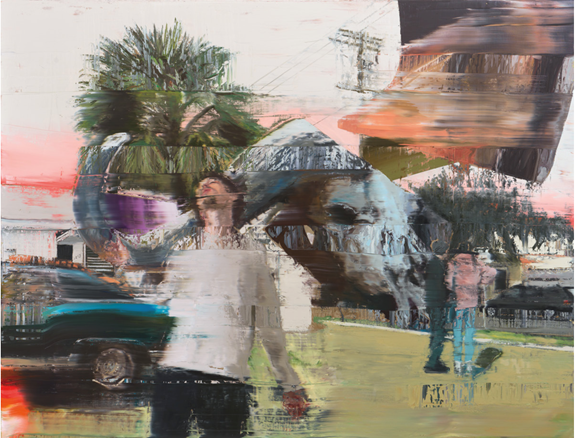 Unlike most artists, Andy Denzler first dedicated his career to abstraction, for a decade, before setting out to depict reality. In 2001, he started his journey down a path of his own, and has since explored a visual language which is instantly recognizable and interweaves figurative and abstract expression.
A painter and photographer by training, Andy Denzler begins his creative process using his camera like a sketch book in his studio. He draws his inspiration therefrom for the postures he instils in his characters, as well as the light and framing that epitomise his compositions. Each painting is the product of several phases in which the artist warps the image, first freshly-painted in thick layers then distorded across the canvas using a spatula and a brush. The streaks and grooves thus formed blur and distort the painting, much in the manner of a paused image on an old VHS tape. From this disrupted representation of reality surfaces a paradox: the viewer is able to decipher and distinguish what is, in the end, somewhat indistinct. As it is, the true subject of his paintings is just as much what is depicted captured as the means used to achieve this form of depiction.
In this new opus, Andy Denzler pursues his exploration of motion, time and the human figure as the core concerns of his art. He has created a series of intimate portraits in private interiors, as well as outdoor scenes made up of various elements assembled together. In his portraits, which mirror today’s society, the artist captures his characters emotional state and introspective stance. A certain fragility and a great silence exude from these figures that appear to fade, inevitably evoking the passing of time. In more complex scenes, Denzler also plays with our perception and leads us to question a different reality. Calling on his own memories, he composes surreal collages in which snatches of everyday life merge.
Denzler’s palette still mainly encompasses a range of flesh-coloured tones as well as ochres, browns, blacks and greys, inspired by faded polaroids or old sun-exposed photographs. Though sometimes a little dark, these colours are always soft and conjure a world imbued with calm in a digital-era society where our minds and spirits are often overly stimulated.
We invite our collectors and visitors to immerse themselves in Andy Denzler’s universe, take the time to converse with his paintings and thus explore the relationship between human nature and its materiality on the surface of a canvas.