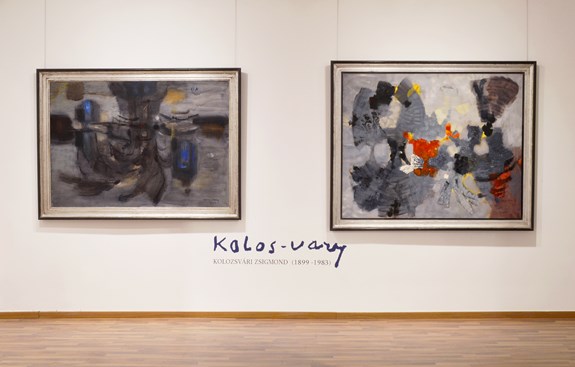 Sigismond Kolos-Vary (1899–1983) came to abstraction in the fifties through a long and patient philosophical exploration of the reality experienced during his remarkable life. Having been born in Transylvania he attended the School of Applied Arts in Budapest from 1915-1918, then the School of Decorative Arts until 1925. After which he travelled through Switzerland and Italy, where he was influenced by the lineal space of Uccello, before settling in Paris where he was soon embraced by the avant-garde artists of the École de Paris.
In 1928 Kolos-Vary held his first one-man show at Galerie Miromesnil, the success of this led to numerous subsequent exhibitions, commencing with the prestigious Galerie Bonaparte in 1929, and Galerie Povolosky in 1930, for which the catalogue introduction was written by Pierre Guéguen. During this time he was also invited to exhibit in the Salon d’Automne, and the Salon des Indépendants. This early period is characterised by surreal semi-figurative compositions, of elaborate mystical imagery.

The artist’s success was however abruptly interrupted by the outbreak of the war, during which Kolos-Vary was put in a concentration camp, but fortunately managed to escape after two years and cross the border into Switzerland, where he remained until the end of the war, at which time he returned again to Paris.

Following this experience Kolos-Vary submerged himself in his painting, producing increasingly powerful compositions. These works were highly acclaimed in 1946 when shown at an important exhibition at the Musée National d’Art Moderne de Paris organised by Jean Cassou. The artist was then approached by eminent art dealer Jean Bucher who gave Kolos-Vary a major one-man show at his eponymous gallery in 1948. During this post-war period Kolos-Vary participated in the radical Salon de Mai, 1949-1958, the Salon des Réalités Nouvelles, 1956-1961, and the Salon des Comparaisons, 1960-1962.
Kolos-Vary attained pure abstraction in the late 1950’s, as a direct progression of his exploration of the sub-conscious fantastic imagery into which he had become immersed. “Aprés L’Orage” is a magnificent example of this period, dominated by vibrant ethereal forms. His writings explain that these wonderfully harmonious compositions are strictly linked to nature through a new spatial interpretation, having found the perceived world too limited. These extraordinary evocative works brought the artist international recognition, and exhibitions in New York 1959; London, 1961; Japan, 1961; and elsewhere including Geneva, Basel, Antwerp, Amsterdam, Brussels, Milan.
Prizes: Prix de la Critique, 1953; Prix de Lissone, 1957; Priz Marzotto, 1960; Prix des Onze, 1966.